Home » The Most Beautiful Dog Breeds In The World 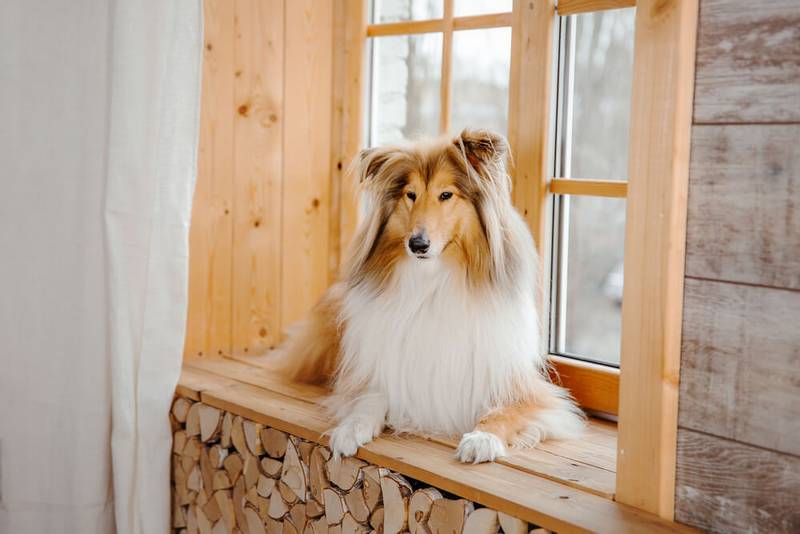 Beautiful dogs are a relative concept: some like tiny fluffy creatures, while others admire giant powerful animals. In addition, each breed is individual in its own way, and over time, the canons of attractiveness change even in the animal world. Nevertheless, we tried to highlight some of the most beautiful dogs, which, according to the editorial board, are distinguished by the most pleasant appearance.

When choosing the most beautiful dog breeds in the world, several professional criteria for the aesthetics of the animal’s appearance are taken into account:

First of all – the exterior, that is, the exterior. The constitution of the dog, its coat, eye color, structure of the muzzle and other external signs. Everything should collectively give the impression of a harmonious combination. Of course, breeders of absolutely all breeds have tried very hard and for years have bred perfect, in their opinion, copies of their favorite animals. However, we have selected exactly those breeds that differ from all the others. These dogs are easily recognized by anyone, even a person who is very far from dog breeding. It is impossible to take your eyes off dogs with such an exceptional appearance when you meet them.

The second important criterion for appearance is the manner and movement of the dog. The most beautiful dogs in the world are very graceful. They are distinguished by a light graceful gait and a royal stance, such a dog should not move awkwardly or waddle.

Finally, the third criterion is the behavior of the dog, which directly depends on the nature of the animal. Some breeds are more friendly and are considered pleasant companions. Lack of aggression and cute habits add attractiveness to the most charming dog breeds.

The Long-haired Scottish Shepherd Dog, or Collie, is a very peculiar breed of herding dogs. Despite her work assignment, she looks rather aristocratic. Thick long hair falls beautifully along the neck and body of the animal, forming an exquisite coat. A bright sable or reddish-black color is necessarily complemented by white bibs and a collar. The muzzle of dogs of this breed looks especially unusual: thanks to the almond-shaped cut of the eyes and the elongated nose, it resembles a fox. This dog is distinguished by a sly, even slightly sly look, which, of course, has nothing to do with its true character.

A collie dog is very friendly, calm (subject to proper training) and affectionate. Even with strangers, the collie behaves with dignity, not allowing himself meaningless growls and aggression. All the beauty of the magnificent Scottish Shepherd Dog can be appreciated by watching the famous film “Lassie” (2005), based on the novel by Eric Knight. The motion picture reveals all the best qualities of this breed. 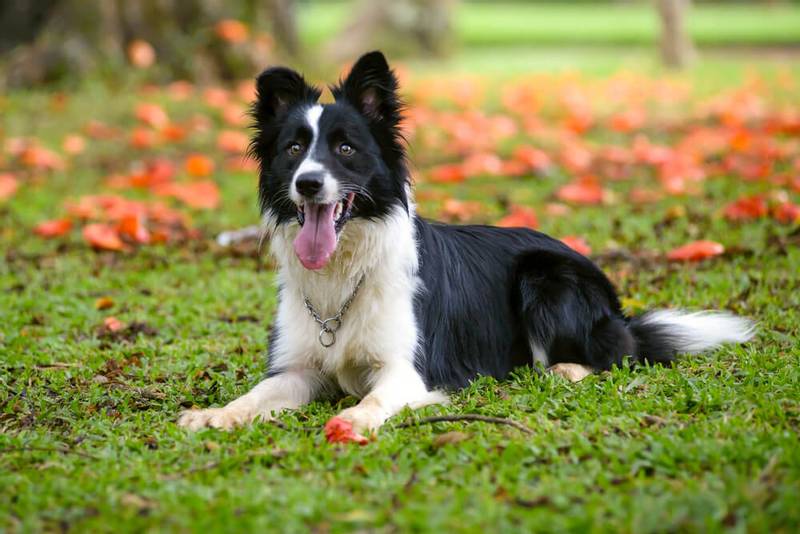 Charming curly creatures cause delight and affection for both children and adults. The poodle, thanks to its dazzling appearance, has become one of the most recognizable breeds in the world. These dogs come in both large and miniature sizes, but all of them are distinguished by an unusually thick curly coat, which, however, requires regular grooming and a haircut. For this breed, there are even several standards for haircuts: “Teddy bear”, “sheep”, “lion”, “bolero” and others. Often, owners like to make funny and elegant hairstyles for their pets. The tails and pigtails gathered above the ears make the dog even more adorable. Especially cute hairstyles look on toy poodles, such dogs literally look like living toys.

It is worth noting the movements of the poodle: the dog walks so gracefully, as if dancing. It is not for nothing that these intelligent pets are most often chosen for training in animal shows. Their unique appearance, grace and charm, combined with high intelligence, make them the stars of any performance. 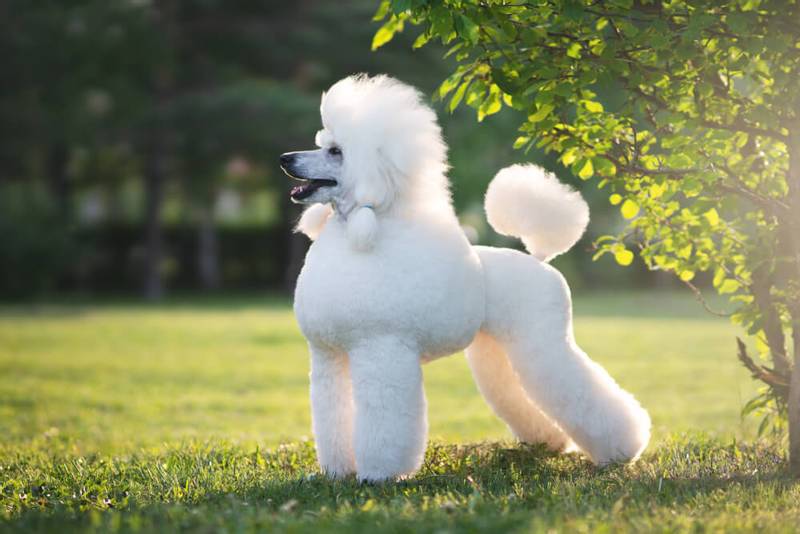 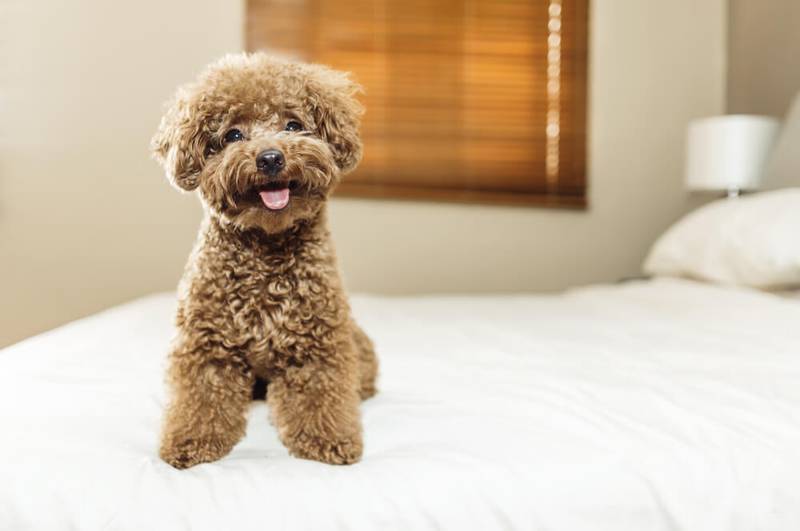 This white fluffy cloud of positive and friendliness will not leave anyone indifferent. The Samoyed Laika, or Arctic Spitz, as it is also called, is distinguished by a very voluminous snow-white coat. A luxurious fur coat combined with clever slanting eyes gives the dog a great look. The Samoyed dog owes such a thick coat to its arctic origin. In color, the dog can be pure white or cream, with silvery, as if sparkling hair tips.

The Samoyed dog excels in dog sledding. Riding is one of her favorite activities. The dog has a lot of liveliness both in character and in movements. These pets move quickly and easily and demonstrate a playful temperament. They do not tolerate loneliness, they love the company of people and animals very much.

Dogs of this breed attract attention not only for their dazzling appearance, but also for their playfulness. Samoyeds are energetic and sociable dogs that win over anyone from the first minutes. 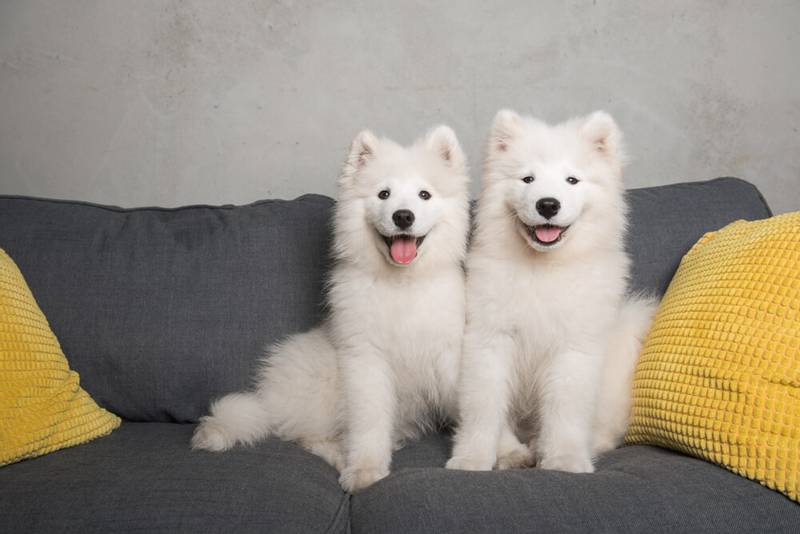 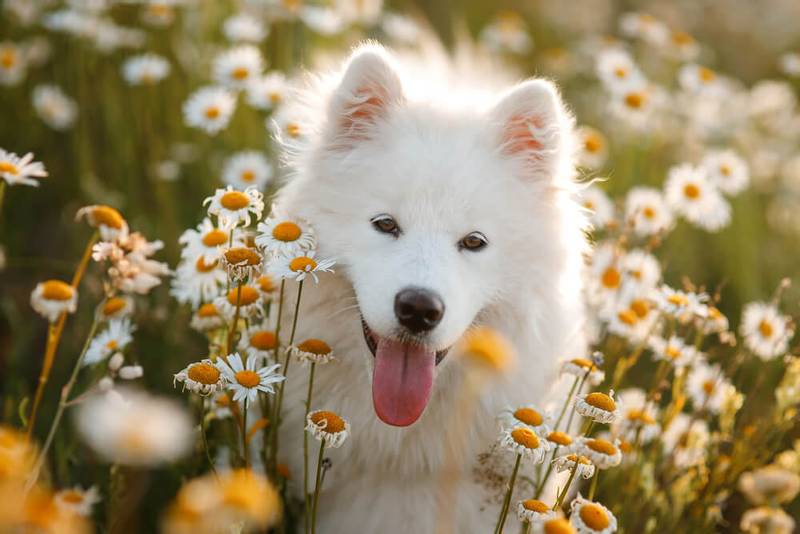 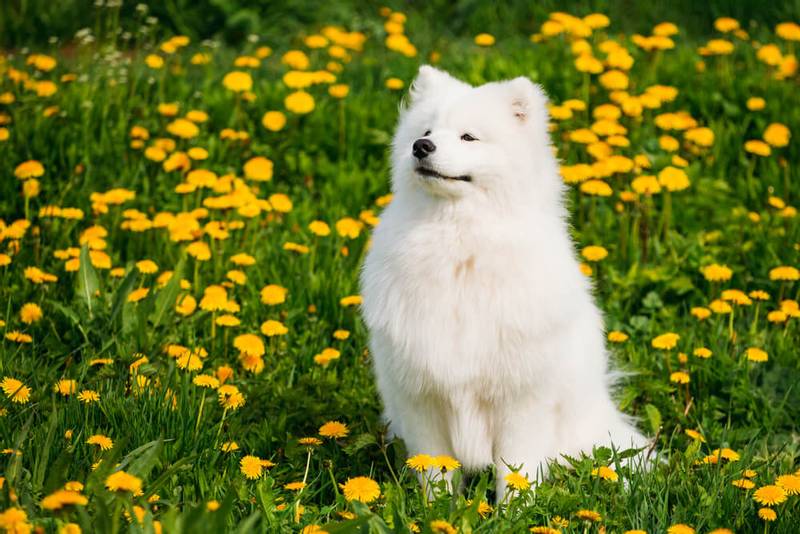 The Doberman looks a little menacing, but very elegant. This is an exquisite breed with an aristocratic appearance and self-esteem, such a dog needs attention and proper education. In color, the dog is most often black, sometimes brown, always with rusty marks on the front. Dogs of this breed have high intellectual abilities and a keen watchful gaze. In the appearance of the Doberman, in his movements, despite the severity, there is an inexplicable sophistication and nobility.

This impressive size dog shows the most courageous character traits, thanks to which it is often used as a service dog in law enforcement agencies. With proper training, the dog will never behave aggressively, it only shows alertness towards strangers, since it has excellent guarding qualities. 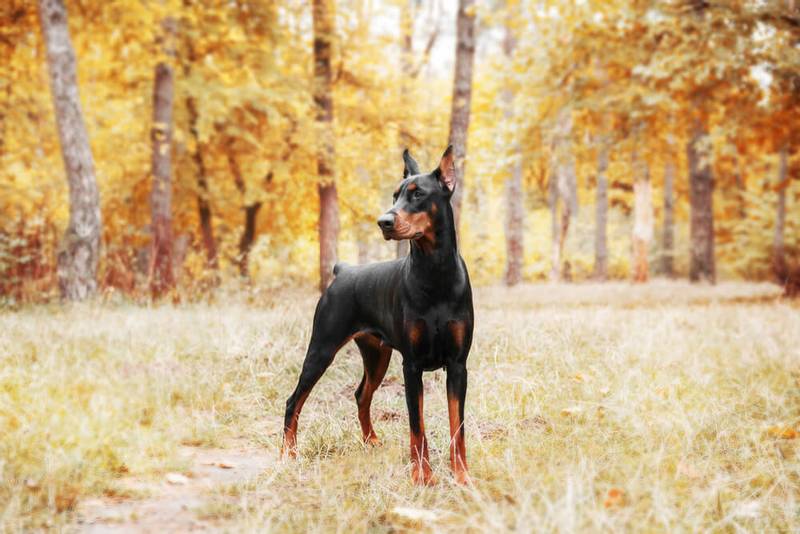 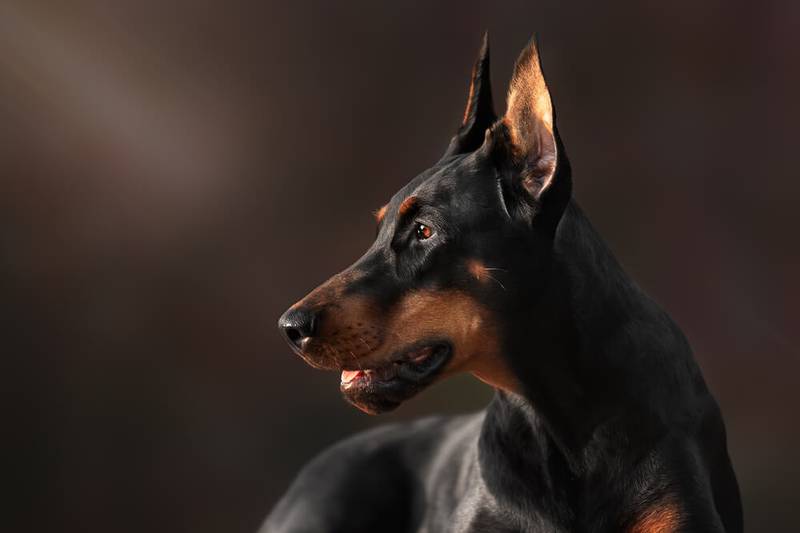 Snow-white wonderful dog, which has long been considered the favorite companion of noble persons. The Maltese lapdog, or maltese, looks like a lively and playful toy. Fully consistent with the status of a royal dog, the lapdog has an exceptional appearance: perfect white hair and a neat muzzle with carefree eyes. Such dogs have always been considered attributes of the luxurious life of their wealthy owners. Refined in a dog is not only external data, but also manners. A purebred lapdog will always move at an easy trot, at ease and flirty.

As a decorative species, the Maltese lapdog loves the company of people. She is quite friendly, but, as befits a spoiled person, she is very selective and often wayward. If the dog doesn’t like the stranger, she can behave arrogantly and sternly with him. Also, aristocratic dogs are distinguished by their stubbornness of character and the constant need for attention to themselves. But the whims of the Maltese lapdog only give it even more charm, because this is a favorite breed of French kings, and pets, as a rule, are very similar to their owners. 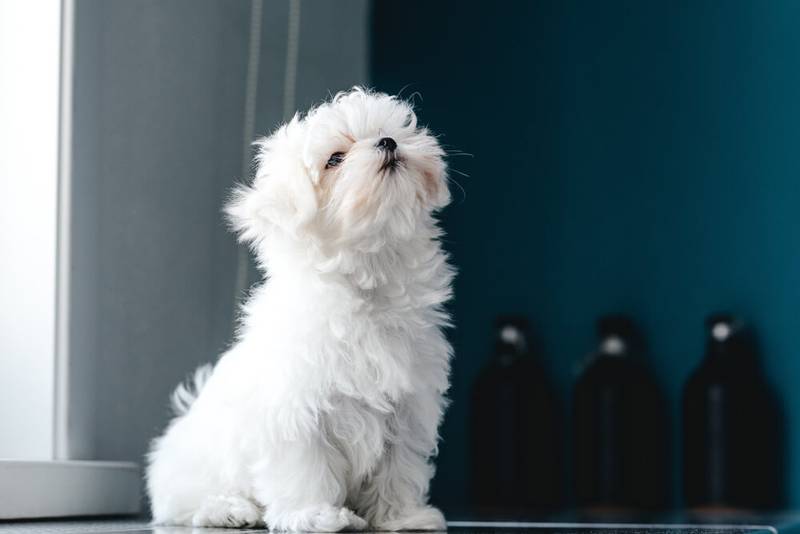 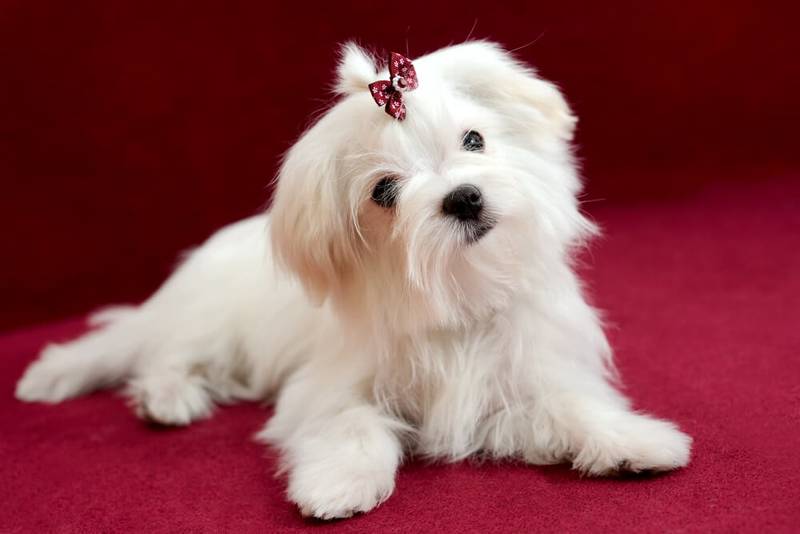 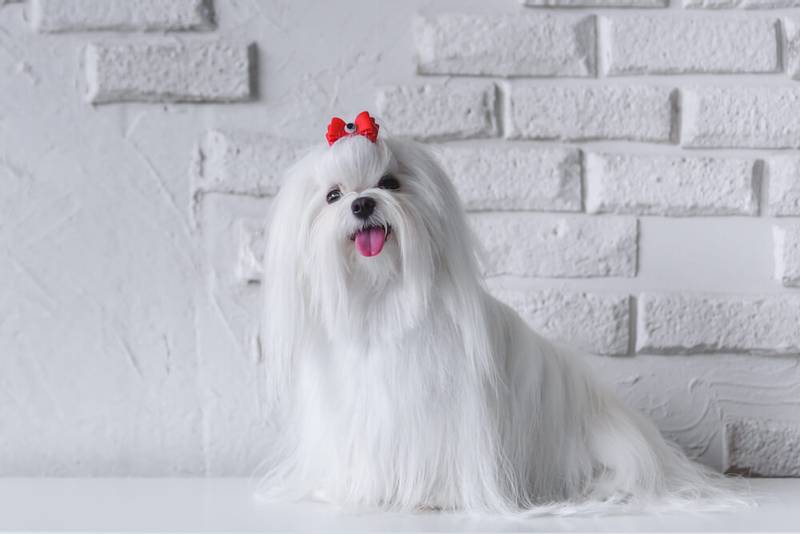 In the dog world, the Afghan hound could well be considered a top model. Long-legged beauty with luxurious silky hair looks like a high-class lady. The coat of this dog can be considered as a work of art, it is very soft to the touch, covers almost the entire body of the animal and falls in strands along the body, like a mantle. When the dog is running or actively moving, the coat flies effectively in the wind, giving the animal a special charm. The muzzle of these dogs is elongated, with curious slanting eyes and a look full of dignity.

The combination of extraordinary appearance with the manners of dogs of this breed is surprising: their proud posture and graceful slenderness give out a person of royal blood. We can say that this is a dog with character, rather selfish and stubborn, can show jealousy of other pets, but at the same time, the Afghan hound is very sociable. With enough attention to her person, she will always pay with mutual affection. Relaxing with such a capricious creature will not work, the Afghan hound knows his worth and always requires the appropriate attitude from the owners. 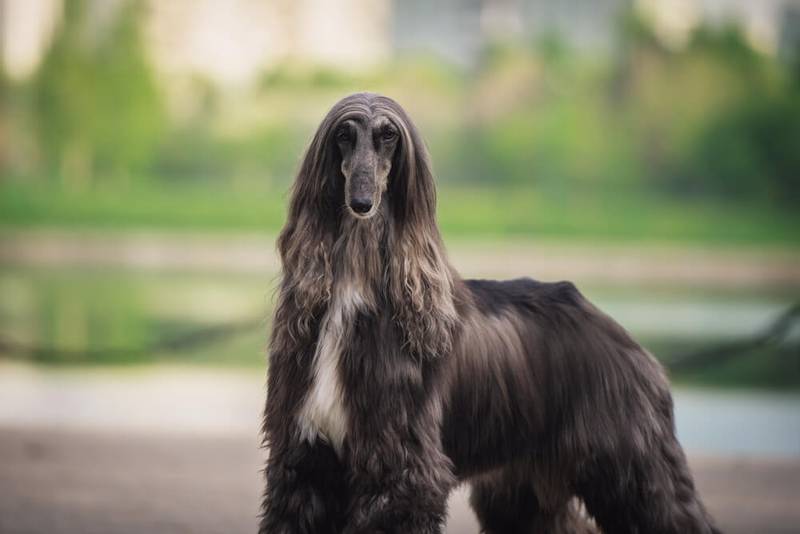 The amazing Chow Chow dog is one of the most famous in the world. It cannot be confused with anyone else, because with its appearance it resembles a teddy bear. Very thick coat is similar to a lion’s mane, it can be black, red, blue and even white in color. Another unusual feature of the Chow Chow is its blue-black tongue. According to an ancient Chinese legend, he became like this because once this dog licked the edge of the starry sky. The chow-chow’s muzzle has a slightly frowning expression, the dog always looks at the world as if it were too serious. In fact, it is a very friendly animal.

The character and behavior of the Chow Chow is rather calm, she is not too active, in an Asian way, restrained, but incredibly friendly. We can say that these dogs are moderately proud and stubborn, therefore they require a very courteous attitude towards themselves. Chow Chow will not jump in ecstasy at the sight of the owner and will not show excessive emotionality in communication, but he is always very affectionate and devoted to the one who cares about him. 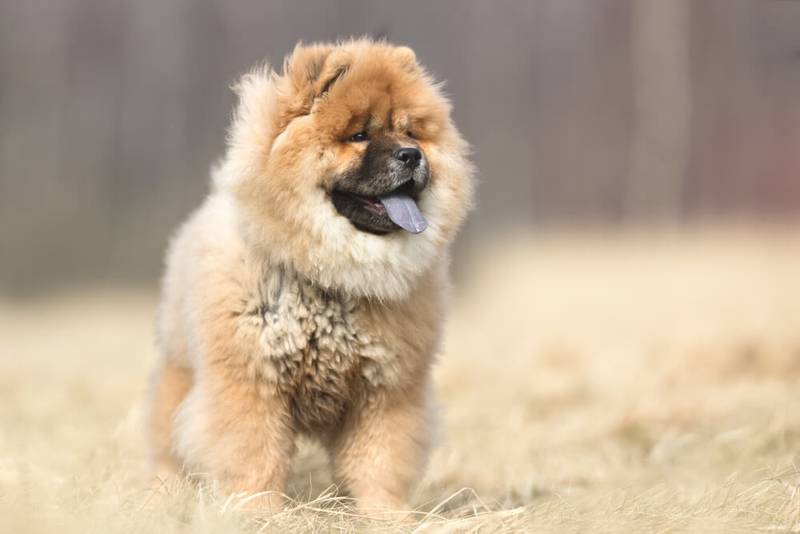 The Dalmatian has an incredibly striking appearance, unlike any other breed in the world. This unusual dog could not go unnoticed, it became incredibly popular, including thanks to the famous Disney cartoon “101 Dalmatians”. Spotted fidget literally attracts attention when meeting and enchants with its cheerful energy. The coat of every Dalmatian is unique, the pattern of the spots is never repeated. Most often these dogs have black or brown spots on a white background. It is interesting that at birth all puppies have an even snow-white color, and spots, like character, begin to appear later in each in their own way.

Dalmatians are very active and playful dogs. If they are properly trained and given proper training from an early age, puppies will grow up very well-mannered. These dogs require an active lifestyle and are very tactful with respect to the mood of their owner. 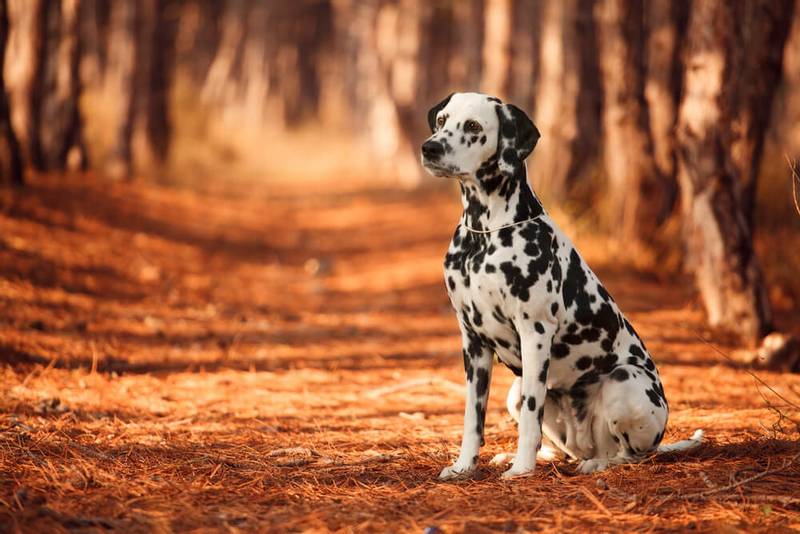 The funny muzzle of the husky made this breed an Internet star. Unusual color and amazing facial expressions ensured popularity and adoration of this dog. It is very interesting to watch her: either the husky seems to be smiling happily, then it is funny frowning. The most striking distinguishing feature of this breed is its crystal blue eyes, full of devotion and love for a person. The dog’s gaze is not only smart, but also interested, full of curiosity. Husky just loves long walks, loves to explore everything around.

Purebred individuals are distinguished by a harmonious and slender constitution, their movements are frisky and easy-going. It was originally a sled dog, so it prefers an active lifestyle. Huskies are incredibly friendly, more of a companion than a guard. However, sometimes the dog can be stubborn. Fluffy, joyful dogs, similar to enthusiastic wind-up toys. The Pomeranian is an incredibly adorable breed that evokes affection and delight. The face of this dog can be of a fox or bear type. In size, the Spitz can be small, mini or even micro, which fits on the palm of your hand. The dog is considered an excellent companion. Despite its miniature size, it is distinguished by courage and fearlessly rushes to protect its master in a moment of danger.

Spitz is the embodiment of grace and grace, the dog is very energetic and light in its movements, it is such a restless springy lump that requires tireless attention to its own person. The look of the dog is mischievous, dark eyes are always alert and observe the world with interest. A very thick coat forms a fluffy cloud around the head and body of the pet. Some owners like to give it a special shape with a haircut – this makes the dog even more cute. In addition to the external beauty, the Pomeranian has a very good-natured character and a full-bodied sonorous voice.